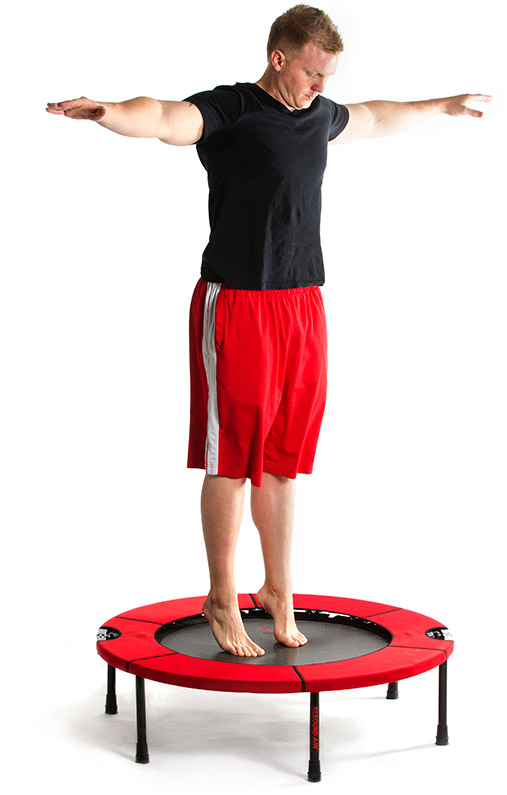 “Rebound exercise is the most efficient, effective form of exercise yet devised by man.”
-The Miracles of Rebound Exercise; Carter, Albert E.; The National institute of Reboundology and Health, Inc. Edmonds, Washington, 1979.

“…for similar levels of heart rate and oxygen consumption, the magnitude of the biomechanical stimuli is greater with jumping on a trampoline than with running, a finding that might help identify acceleration parameters needed for the design of remedial procedures to avert deconditioning in persons exposed to weightlessness. “
-NASA

The above statement is one of several made in a scientific study published in the Journal of Applied Physiology 49(5): 881-887, 1980, which confirms many of the statements previously made in The Miracles of Rebound Exercise, 1979. The research was performed by the Biomechanical Research Division, NASA-Ames Research Center, Moffett Field, California, in cooperation with the Wenner-Gren Research laboratory, University of Kentucky, Lexington, Kentucky.

The four scientists, A, Bhattacharya, E. p, McCutcheon, E. Shvariz, and J, E. Greenleaf, secured the assistance of eight young men between the ages of 19 and 26 to each walk, jog, and run on a treadmill which was operated at four different speeds and then jump on a standard sized trampoline at four different heights to compare the difference between the two modes of exercise.

Although treadmill running had been studied many times before, the scientists found that “…measurements of the necessary variables have not been reported previously for trampoline exercise.” The trampoline testing was conducted at least one week after the treadmill testing.

A pulse before exercising

A pulse immediately after exercising

The amount of oxygen consumed while excercising

The amount of G-force experienced at the ankle while exercising

The amount of G-force experienced at the forehead while exercising

The pulse was obtained by a battery-powered electrocardiographic unit taped to the subject’s body which transmitted its signals to a custom designed receiver which in turn recorded the information by electronically writing it on a chart.

The oxygen consumption was measured with a K-meter that the subject carried on his back. The G-force experienced by the ankle, back and forehead of each of the university students was measured by small sensitive accelerometers which were placed in Plexiglas holders that were taped to the ankle, the small of the back, and the forehead.

After a thorough medical examination, the healthy students were issued a pair of shorts and new Nike running shoes to standardize the conditions to be measured. They were given familiarization sessions on laboratory procedures, treadmill running, and trampoline jumping to ensure the exercise techniques would be the same. Each student then walked or ran four different speeds on the treadmill with a five to ten minute rest period between runs while the scientist recorded their statistics and compared them with previous treadmill studies for accuracy.

A week later, these same athletes returned to bounce on a trampoline at four different heights with a five to ten minute rest period in between exercise sessions. Again the scientists recorded their statistics, only this time, they had no previous studies to compare them to since trampolining had not been previously studied. The only studies available were the preliminary studies which began in August of 1977 on passive restrained humans and animals exposed to increasing frequency and amplitude of vibration forces designed to increase heart rate and metabolic activity, “These responses measured by whole-body vibration resemble those during mild exercise and suggest that perhaps body vibration could be used in place of exercise for those who are ambulatory.

This helps to explain shin splints and knee problems, especially when the natural shock absorbing system of the body becomes so fatigued that it doesn’t do its job correctly, thus throwing added unexpected forces on already tired muscles, ligaments, and tendons, forcing them beyond the point of rupture.

While jumping on a trampoline, the G-.force was almost the same at all three points, (ankle, back, forehead) and well below the rupture threshold of a normal healthy Individual.

This makes it possible to exercise the entire body knowing that there is no undue pressure applied to any part of the body such as the feet, ankles, and legs, and at the same time knowing that each part of the body is receiving the necessary environmental stresses it needs to become stronger cell by cell.

“The external work output at equivalent levels of oxygen uptake was significantly greater while trampolining than running. The greatest difference was about 68% .”

The efficient use of the vertical forces of acceleration and deceleration to produce internal loading by directly opposing the gravitational pull develops more biomechanical work with less energy expended, thus less oxygen used and less demand placed on the heart.

While trampolining, as long as the G-force remained below 4-Gs, the ratio of oxygen consumption compared to biomechani- cal conditioning was sometimes more than twice as efficient as treadmill running.

It is Important to note that although this experiment was performed on a trampoline where the participants were able to develop a G-force as high as 8-G’s, the efficient use of energy was below 4-G’s. People involved in rebound exercise on rebound units have been measured only as high as 3.5-G’s, (United States Air Force, Dr. Ward Dean) so that any activity on a rebound unit is more efficient than treadmill running at any speed.

With the G-force the same as or greater than 4-G’s II …there was no significant difference in the oxygen uptake between the two regimens.”

Even when a person is able to develop a force on the trampoline of more than 4- G’s, although it is no more efficient as far as oxygen consumption than running, it is still much better on the lower extremities because all of the cells of the body are still below their rupture threshold providing a safe way to exercise.

” …averting the deconditioning that occurs during the immobilization of bed rest or space flight, due to a lack of gravireceptor stimulation (in addition to other factors), requires an acceleration profile that can be delivered at a relatively low metabolic cost. .for equivalent metabolic cost, and acceleration profile from jumping will provide greater stimuli to gravireceptors.”

This statement verifies the fact that rebound exercise is an excellent exercise for our senior citizens, those physically handicapped, those who are recuperating from an accident or injury, or anyone else who needs exercise but is hampered by a preexisting physical condition.

For more information about this astounding exercise concept, please call the American Institute of Reboundology, Inc. toll free 1-888-464-JUMP (5867) We have the most extensive collection of educational materials related to Rebound